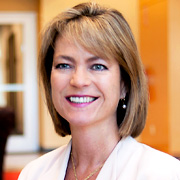 She serves as a judge for the global Circular Awards with the World Economic Forum, working to increase understanding of the benefits of a circular economy. She is also on the national corporate advisory board for the American Red Cross. Trisa received the 2008 Volunteer of the Year award from the United Way of Austin. In addition, in 2014, the National Diversity Council awarded her the Most Powerful and Influential Women of Texas Award and they also named her as one of the Top 50 Women in Technology in 2014.

Outside of the office, Trisa is the current chair of the LifeWorks Board of Governors, an organization helping homeless teens gain self-sufficiency. Trisa also serves on the Emeritus Advisory Board for Law and Technology News.

Previously, Trisa served on the Boards of the United Way in Central Texas, the Women’s Giving Network, Greater Austin Chamber of Commerce, I Live Here I Give Here, and was president of the Zach Scott Theatre and KLRU Boards. She was also a founding member of the Austin/San Antonio Chapter of the Texas General Counsel Forum.