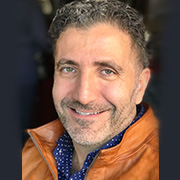 Bassam Kassab is a native of Lebanon. As a teenager, he was passionate about French literature but ended up majoring in Civil Engineering at the American University of Beirut. In his second year at college, he became interested in fluid mechanics and numerical analysis and he decided to pursue a career in water resources engineering. After receiving bachelor’s and master’s degrees in Civil and Environmental Engineering, he went on to graduate school at MIT to earn a degree in Hydrology and Water Resources.

Bassam has been working since 2001 at the Santa Clara Valley Water District and is currently a water resources engineer supervising the groundwater modeling and management group.

Furthermore, since 2014 he has been teaching hydrology and hydraulic engineering classes at San Jose State University.

Bassam has also designed and taught a three-level, 18-month Spanish class for adults. He is the executive director of Zarco Films, an independent film production company based in San Jose. During his free time, Bassam writes screenplays in Spanish and produces fiction films that tackle contemporary social issues. He is also a songwriter in the four languages that he is fluent in –Arabic, English, French and Spanish– and was an actor in a play and two feature films including Sin Visa (Without a Visa).