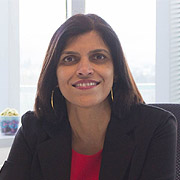 Beena Ammanathis Board Director at ChickTech, an organization focused on increasing and retaining diversity in tech. She is also an award-winning technology executiveand thoughtleader whose work has shaped the usage of data,analyticsand artificial intelligenceat several corporations.She is a seasoned leader with over 25years proven track record of building and leading high performance teams from the ground-up scaling 0 to 250+ geographically distributed global teams with a sharp focus on strategy and successful execution of industrial scale products and services.

Beena has workedat several recognizedinternational organizations British Telecom, E*trade, Thomson Reuters, Bank of America and also, Silicon Valley startups,in engineering and management positions.Sheis currently the Vice President of Innovationat General Electric, where she is responsible for shaping GE’s digital industrial transformationleveraging the latest technological advances.She is also shaping the future of Computer Scientists via her role on the Industrial Advisory Board at Cal Poly College of Engineering.Beenahas been a featured speaker on the topics of women in leadership, women in STEM, artificial intelligence,data science, big data, and digitaltransformation, at numerous industry conferences.

Beena has been recently honored by the San Francisco Business Times as one of the2017 Most Influential Women in Bay Area.Previously, she won the 2016 CIO-DrexelAnalytics 50 award for being one of the top 50 global innovatorsin data scienceand was named as one of the 2017 top 8 female analytics expertsby Forbes.She is also the winner of the2016 SuperAchiever Woman Leader of the yearfrom World Women’s Leadership Congressfor her dedication to supporting diversity in tech andbeing a role model to several young women in tech.