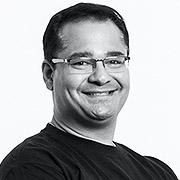 Snehal Antani serves as the SVP/GM of Business Analytics & IoT for Splunk. He joined Splunk in 2015 as CTO, where he helped drive the long term vision and strategy for the company across IT, Security, Business Analytics, and the Internet of Things. Prior to Splunk, he served as CIO of GE Capital’s Distribution Finance business, as well as Chief Architect for GE Capital North America. In 2016, Antani was recognized as a Premier 100 award winner by Computerworld, for the digital transformation he drove while at GE, evolving IT from a back-office function to a core part of the value delivered to customers. Snehal started his career as a software engineer at IBM, where his work led to 11 patents spanning systems optimization, data processing, and large-scale transaction systems. Snehal holds a bachelor’s degree in Computer Science from Purdue University, and a master’s degree in Computer Science from Rensselaer Polytechnic Institute (RPI).