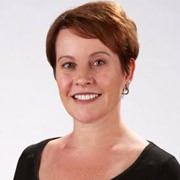 Tonie oversees corporate responsibility, a function she helped to build since starting at NVIDIA in 2006.

As a strategist and communicator, she drives best practice and leadership initiatives that strengthen NVIDIA’s sustainability and brand reputation, and works with colleagues to streamline CR compliance efforts. She publishes the company’s sustainability report and engages with shareholders, NGOs and customers as they track NVIDIA’s progress. Tonie also leads NVIDIA’s charitable foundation, which aims to accelerate solutions to the world’s most pressing issues in health and education.

She’s been an active voice in developing strategies and KPIs forNVIDIA’s diversity and inclusion efforts, and is a founder and co-chair of the company’s women in tech group. Prior to joining NVIDIA, she spent 15 years in a variety of marketing roles. She earned her MBA in 2000 from Babson College, has been recognized by CRO Magazine as a CR Superstar, the Silicon Valley Business Journal as a Women of Influence, and received a YWCA Tribute to Women award.